'The New War' is Now Available on All Platforms 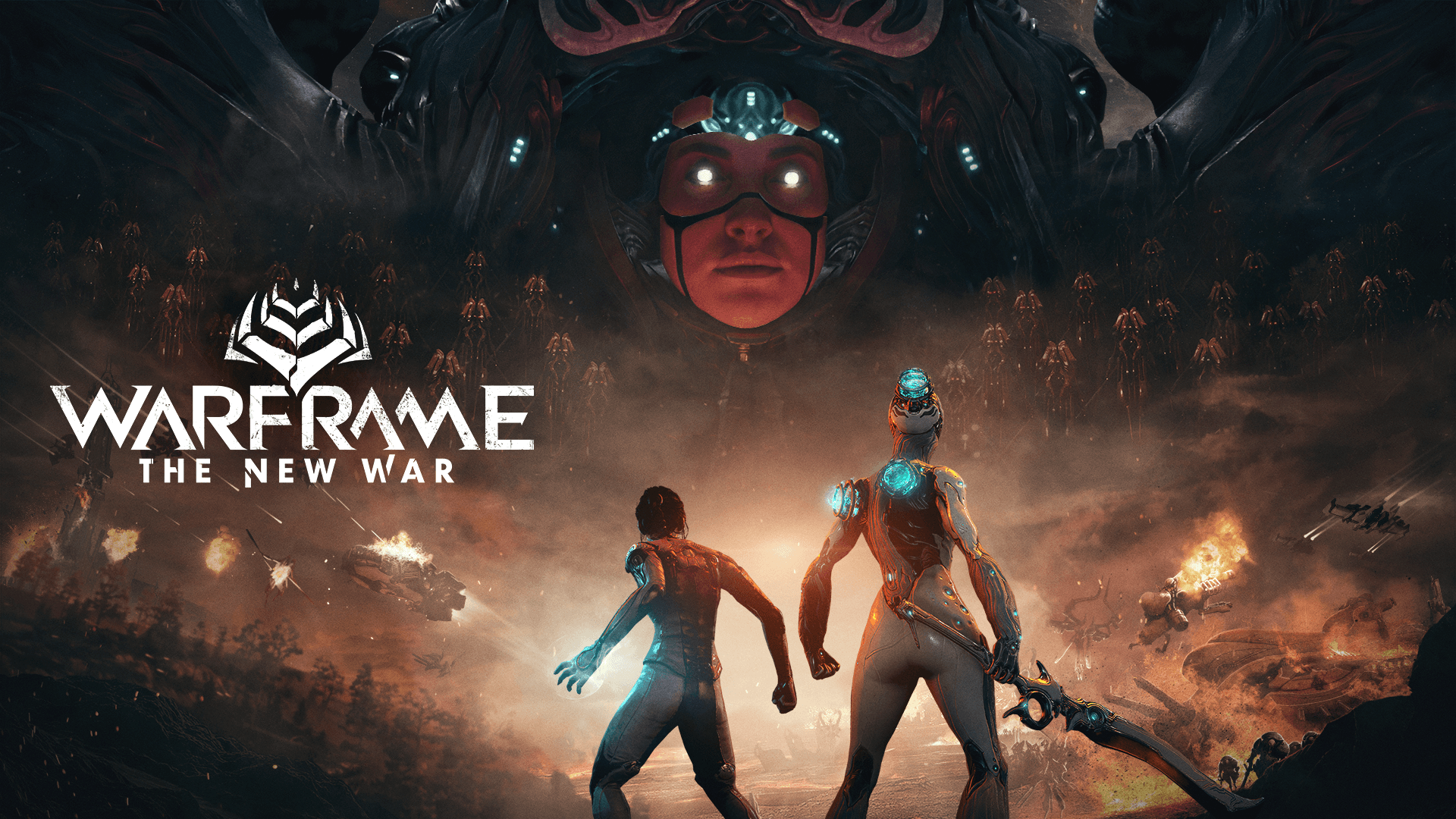 Enhance the Experience and Harness the Beauty and Brutality of the Sentients with Exclusive ‘The New War’ Supporter Packs Offering Bundled Access to Rare and Powerful Weapons, Customizations, and More

Digital Extremes will release its anticipated cinematic story-driven Warframe expansion The New War for all platforms simultaneously today. The expansion is the first major cinematic release for Warframe to take full advantage of next-gen platform tools since the award-winning action game released for next-gen consoles. Full of non-stop space action, combat, and a spoiler-heavy personal story of self-discovery, Warframe’s The New War is the culmination of its free Cinematic Quest line - a AAA developed single-player story-driven experience within Warframe that takes players on a journey across its 16 planets and 3 Open Worlds as they work to restore balance to a fractured interstellar ecosystem, the Origin System. Dramatic twists and unexpected surprises litter The New War with unforgettable moments that will leave players on the edge of their seats waiting to discover what unfolds.

The New War launch trailer demonstrates how the cinematic expansion takes advantage of some of Warframe’s most thrilling features and systems, including ship-to-ship space combat with Railjack, Necramechs, and of course, more Warframe action.

“We are incredibly lucky to have had the opportunity to develop The New War for a community of players that continues to be overwhelmingly supportive and patient,” said Steve Sinclair, Creative Director for Warframe at Digital Extremes. "We've always considered our storytelling our greatest strength - and to finally continue this story alongside our community is just one of the wildest and most rewarding experiences. We truly put everything into this - we hope we have given our Tenno their best chapter yet in "The New War'.”

The biggest chapter in Warframe’s free Cinematic Quest line, The New War takes players on a journey across 3 massive acts as they experience war from different perspectives and complete Missions in new environments, including Open Worlds besieged by Sentients, and sets the stage for the next chapter and the future of the game. As the war rages on, players will discover more about the truth behind the conflict, understanding the Lotus’ past and the nature of their mother-and-child relationship to unlock a new future.

“It’s an incredibly emotional experience for all of us on the team to finally deliver The New War to players.  Our community of Tenno that have waited so long for this moment - we share every emotion on this journey with them!,” said Rebecca Ford, Director of Community and Live Operations for Warframe at Digital Extremes. “This next chapter is full of surprising twists and turns and will take players to new areas in Warframe in unexpected ways. We can’t wait for players to discover this experience today.”

The launch of The New War brings additional features to Warframe which lets players wield limitless power to look and play the way they want, including the addition of a new Warframe, and an Arsenal reinforced with new Customizations, Weapons, and Accessories for the ultimate fight on the frontlines against the invading Sentients. A variety of Supporter Packs for The New War are available for a limited-time and offer bundled access to some of Warframe’s most anticipated new features and offerings, including its newest Warframe, Caliban, and a slew of Sentient-inspired upgrades that will inspire beauty, grace, and brutality in the fashion framing community. The Ravurex Gunblade Skin, Sentient Color Palette, Archon Nira Glyph, and Archon Nira Sigil are time-limited exclusives to The New War Supporter Packs. All other Items and Customizations are available for purchase with Platinum starting today from the Warframe Market. 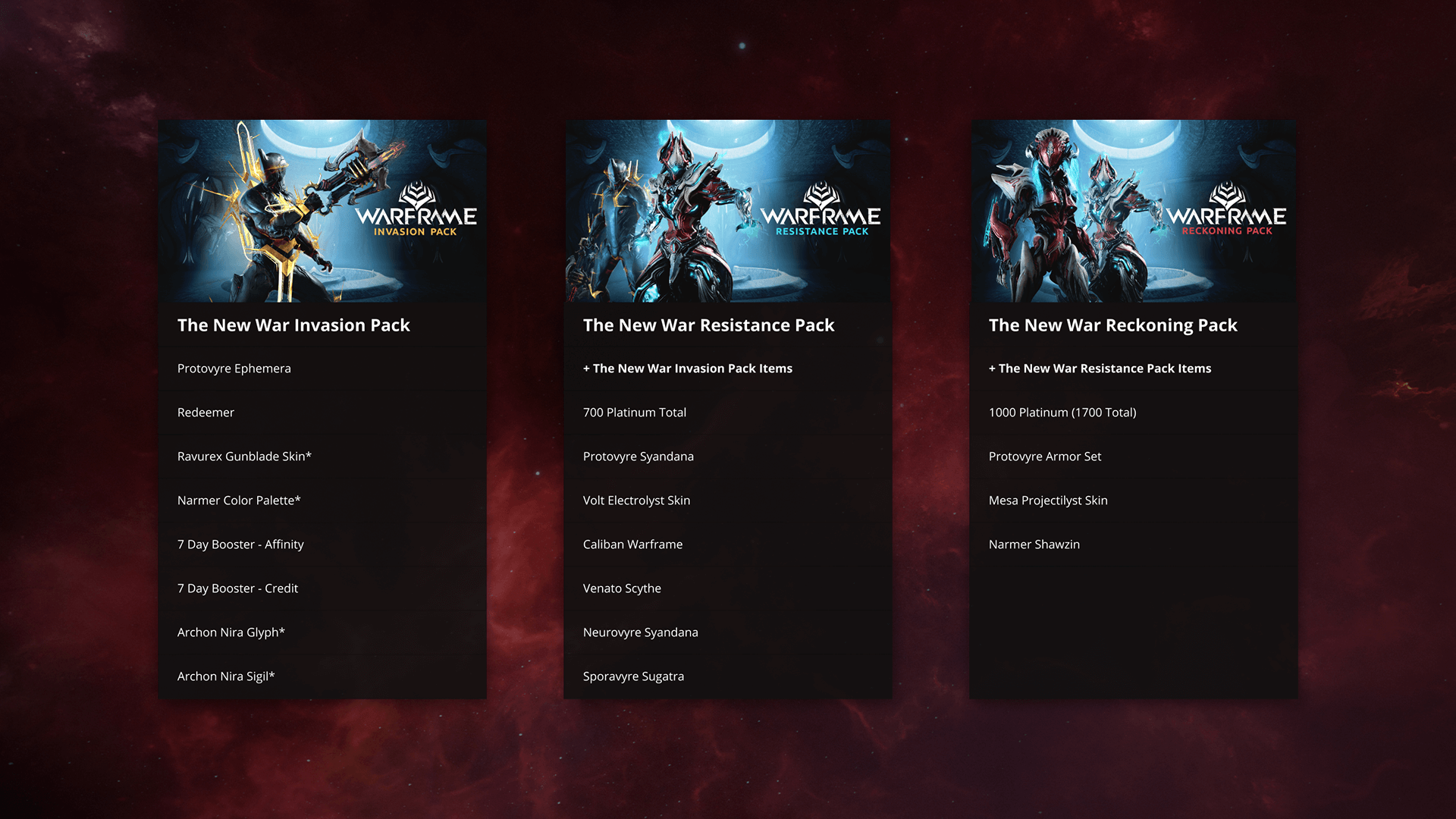 The New War brings a wealth of content that continues to add ultimate thrills with more ways to play, including the release of Warframe’s 48th playable Warframe, Caliban, and the launch of Harrow Prime Access.

Erra’s twisted masterpiece, a true hybrid of Warframe and Sentient. Raised from the wreckage of the Old War to carve a swathe through the New. The first Sentient-Warframe hybrid, Caliban has a passive Ability to resist damage types as he continues to take hits (for himself and his squadmates). Unlike Revenant - who was infused with the rich energy of an Eidolon - Caliban was specifically engineered by Sentient leader, Erra, to utilize the adaptive powers of his kin. The result is a Warframe built for survival and equipped with overwhelming offensive Abilities.

Harrow Prime Access launches today alongside The New War and for a limited-time, players can instantly unlock or earn Harrow Prime and his signature Weapons and Accessories. Always prepared to sacrifice, this monastic Warframe uses the Void to bolster allies’ defenses and amplify their lethality.